The manuscript, which forms part of our Dean Rusk International Law Center Research Paper Series at SSRN, may be downloaded at this SSRN link.

“And it explores how legal realism translates into four noticeable trends in American approaches to international law:

(1) a focus on norms rather than rules,

(2) a focus on process rather than doctrine,

(3) a focus on institutions and power rather than substantive rules, and

(4) an emphasis on pragmatism and practicality.”

For years, Law Hawk has stood guard at the University of Georgia School of Law. Seeing her is a good and awesome omen. As reported in 2012 by Red & Black, the university’s student newspaper:

“Law Hawk has unofficially been identified as a female, broad-winged hawk that spends most of her days perched in the dogwood trees outside the Law Library window on North Campus.”

This morning she explored the law school’s Dean Rusk Hall. The video above, by Administrative Assistant Nikki Clarke, finds Law Hawk first on a railing outside, then in full-wingspan flight. Moments later, she rose from the ivy grounds, startling an unsuspecting passerby.

Law Hawk’s appearances have generated her own Facebook page, plus a fearsome catchphrase:

Oh, and did we mention our owl?

Yanying Zhang, a widely published legal scholar from China, is now in residence as the 2017-18 Visiting Scholar here at the Dean Rusk International Law Center, University of Georgia School of Law. She joins us from China’s Shandong University of Finance and Economics, where she serves as Professor of Law, Graduate Supervisor, Director of the Comparative Law Research Center, and Vice Dean of the Economic and Trade Law Department.

Professor Zhang will continue her research on Land Takings from the Perspective of Remedy: Problems Inspection and Systems Innovation, funded by a grant from the Ministry of Education of China. Professor Christian Turner will serve as her Georgia Law faculty sponsor.

Her visit continues our Center’s long tradition of hosting, for brief or extended stays, scholars and researchers whose work touches on issues of international, comparative, or transnational law. Details and an online application to become a visiting scholar here.

Professor Zhang earned her doctorate in comparative law from China University of Political Science and Law, her master’s degree in law from Renmin University of China, and her bachelor’s degree from Shandong Normal University. She has published numerous books and articles in her areas of research, which include comparative law, land law, contracts, torts, administrative remedies, dispute resolution, and bilingual education, and has received awards for her scholarship and teaching. She is a member of the China Law Society, a Council member of the Shandong Law Society, and a Council member of the Chinese Society of Comparative Law. 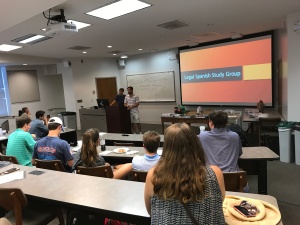 A feature of our second week of our fall semester was yesterday’s launch of the Legal Spanish Study Group, an initiative of the Dean Rusk International Law Center at the University of Georgia School of Law.

Leading the lunchtime session were the Group’s  co-coordinators, Georgia Law 2Ls Matthew Poletti and Brian Griffin. Both are Spanish speakers who were Global Externs Overseas this past summer – Matt at Araoz & Rueda Abogados in Madrid, Spain, and Brian at PwC in Milan, Italy. (Brian also attended our Global Governance Summer School.) They continue a tradition begun by the Group’s founding coordinator, Pedro Dorado (JD’17/LLM’15). Professor Diane Marie Amann, Emily & Ernest Woodruff Chair in International Law and a Faculty Co-Director of the Center, will serve as the Group’s faculty advisor.

This will be the 2d consecutive year that this Group convenes, most timely given yesterday’s New York Times report on the entrenchment of Spanish in the United States – which has more Spanish speakers than Spain – and the world – where more countries have Spanish as the majority language than any other language.

In the words of Matt and Brian:

“In our ever-more interconnected world, and especially in today’s legal field, proficiency in a second language is a skill in high demand. It might even make the difference in landing your dream job. We invite all law students to join us in our endeavor to improve our Spanish language skills, develop a better understanding of the Hispano-American legal world, and prepare for a globalized legal practice.”

Many students accepted that invitation, promising great Study Group meetings each week throughout the semester.

Monday was orientation day for the students who’ll work on the 46th volume of the Georgia Journal of International & Comparative Law here at the University of Georgia School of Law.

Among the year’s highlights will be the annual GJICL conference, set for Monday, September 18. Entitled “The Next Generation of International Trade Agreements,” it will feature more than a dozen specialists in trade, including 4 Georgia Law alums: the 1st woman to serve as GJICL Editor-in-Chief, Terry Labat; former GJICL Articles Editors Audrey Winter and C. Donald Johnson, Director Emeritus of our Center; and Tina Termei. Joining them will be other academic and practitioner experts from around the world.

This daylong event will celebrate the 40th anniversary of the law school’s Dean Rusk International Law Center, a cosponsor.

Looking forward to another great year!

Kathleen A. Doty is the new Director of the Dean Rusk International Law Center at the University of Georgia School of Law. Assisting her are two Faculty Co-Directors, Diane Marie Amann and Harlan G. Cohen. The appointments took effect on August 1.

Since May 2017, Doty (left) has served as the Center’s Interim Director. She joined the law school in 2015, serving first as the Center’s Associate Director of Global Practice Preparation and then as Director of Global Practice Preparation. Her portfolio included: planning and the implementation of lectures, conferences and other events; research projects; advising students interested in global legal practice; administering Global Externships Overseas and At-Home; and coordinating and serving as a faculty member in the Global Governance Summer School, a 10-day offering in Europe conducted in partnership with the Leuven Centre for Global Governance Studies at the University of Leuven, Belgium.

As Director, Doty will oversee both global practice preparation and international professional education, including the Master of Laws, or LL.M., degree for foreign-trained lawyers. Her duties as a member of the law faculty will include teaching the Legal System of the United States course to LL.M. candidates.

“We are very pleased that Kate Doty has agreed to take on this leadership role at the law school. I am confident that the center will benefit from her energy and extensive experience in the practice of international law.”

This autumn, the Center will celebrate its 40th birthday. Its namesake is Dean Rusk, who served as a law professor at the University of Georgia after serving as Secretary of State to Presidents John F. Kennedy and Lyndon B. Johnson. The Center serves as the law school’s international law and policy nucleus for education, scholarship, and other collaborations among faculty and students, the law school community, and diverse local and global partners. U.S. News & World Report ranks the law school’s international law curriculum 18th among U.S. law schools.

Professor Amann, who holds the Emily & Ernest Woodruff Chair in International Law, has just completed a term as Georgia Law’s Associate Dean for International Programs & Strategic Initiatives. An expert in public international law, she is a Counsellor of the American Society of International Law and serves as Special Adviser to the International Criminal Court Prosecutor on Children in & affected by Armed Conflict.

Amann will serve as Faculty Co-Director with Professor Cohen (right), holder of the Gabriel M. Wilner/UGA Foundation Professorship in International Law and an international economic law expert who is the Managing Editor of AJIL Unbound, the online platform of the American Journal of International Law.

“Diane provided excellent leadership for the Center over the past two-plus years, creating a strong foundation on which Kate and her team, assisted by Harlan and Diane, will build. I am confident the law school’s influence in the area of international law and policy will continue to grow.”

She serves in leadership roles for the American Society of International Law (with which Georgia Law is an Academic Partner), as Chair of ASIL’s Non-Proliferation, Arms Control, and Disarmament Interest Group and Vice Chair of its Lieber Society on the Law of Armed Conflict. In 2016, Doty was selected as a Young Leaders Fellow by the World Affairs Council of Atlanta and joined other fellows in a professional development tour of China.

While earning her J.D. degree at the University of California, Davis School of Law, she competed in the international rounds of the Philip C. Jessup International Law Moot Court Competition. After serving as a judicial clerk on the Hawaiʻi Intermediate Court of Appeals, she was the inaugural Fellow of the California International Law Center at Cal-Davis Law. She received her undergraduate degree from Smith College, with a major in Latin American Studies and a minor in Film Studies, and studied abroad at La Universidad de la Habana in Cuba. She is fluent in Spanish and proficient in French.

Today’s the 1st day that foreign-trained lawyers may apply for 2018-19 study toward the Master of Laws, or LL.M., degree at the University of Georgia School of Law.

Over the last 4 decades, the law school has produced more than 450 LL.M. graduates, with ties to 75 countries and every continent in the world. They include judges and law firm partners, leaders in governments and in intergovernmental and nongovernmental organizations, CEOs and heads of corporate legal departments, and university professors and administrators.

Our LL.M. students pursue a one-year, full-time plan of courses side by side with J.D. candidates, gaining exposure to diverse viewpoints on a range of legal issues. They follow a flexible curriculum tailored to individual career goals – whether it’s preparation to sit for a U.S. bar examination, pursuit of a Concentration affording advancement in their home country’s legal profession or academic institutions, or something else.

As shown in our prior posts, LL.M. students benefit from the superb resources of a highly ranked law school in the heart of a top-20 public university: renowned faculty; research facilities like the Alexander Campbell King Law Library, as well as the Louis B. Sohn Library on International Relations and other initiatives at the Dean Rusk International Law Center; experiential learning opportunities; professional development and career preparation; and world-class lectures and conferences.

Details in our new LL.M. brochure (above), available in downloadable PDF and online booklet formats.