An alumnus and member of our Dean Rusk International Law Center Council has garnered well-deserved praise from a fellow public servant and longtime colleague.

In “A Tribute to Charles A. Allen,” published Friday at Lawfare, Jeh Johnson, a partner in the Paul Weiss law firm and the U.S. Secretary of Homeland Security from 2013 to 2017, celebrated the 20th anniversary of the day that Allen took up the post of Deputy General Counsel (International Affairs) at the U.S. Department of Defense. Johnson wrote:

“To the benefit of us all, he remains in office today, with the vast responsibility of overseeing the legal aspects of the U.S. military’s operations abroad.

“Put simply: Chuck is one of the finest public servants I know. He embodies the best in federal civilian service.”

Johnson, also former general counsel both of the Department of Defense and of the U.S. Air Force, took particular note of Allen’s service, in the wake of the terrorist attacks of September 11, 2001, “at the legal epicenter of the U.S. military’s armed conflicts against al-Qaeda, the Islamic State and the Taliban; the Iraq War; the conflicts in Libya and Syria; the maritime disputes with China and Iran; and many other conflicts, treaties and defense issues too numerous to list.”

Allen, Johnson continued, is “an earnest, low-key public official who consistently works long hours, mentors young national security lawyers and grinds out an extraordinary volume of work” – and the recipient of a Presidential Rank Award.

We at the University of Georgia School of Law are proud to call Allen (JD’82) an alumnus, former Research Editor of the Georgia Law Review, and author of two articles published in our Georgia Journal of International and Comparative Law: “Civilian Starvation and Relief During Armed Conflict: The Modern Humanitarian Law” (1989) and “Countering Proliferation: WMD on the Move” (2011).

As stated in Allen’s DoD biography, he also earned an undergraduate degree from Stanford and an LL.M. from George Washington University. His service in the U.S. Navy Judge Advocate General Corps included a stint as Deputy Legal Adviser, National Security Council, and Attorney-Adviser, Office of Legal Adviser, U.S. Department of State. In his current position, Allen’s responsibilities include

“legal advice on Department of Defense planning and conduct of military operations in the war on terrorism and the war in Iraq, including the law of armed conflict and war crimes, war powers, coalition relations and assistance, and activities of U.S. forces under international law and relevant UN Security Council Resolutions; arms control negotiations and implementation, non-proliferation, and cooperative threat reduction; status of forces agreements; cooperative research and development programs; international litigation; law of outer space; and multilateral agreements.”

(credit for 2015 International Committee of the Red Cross photo, above, of Charles A. “Chuck” Allen at Minerva–ICRC conference on International Humanitarian Law, held in Jerusalem 15-17 November 2015)

Professor Christopher Bruner, the Stembler Family Distinguished Professor in Business Law here at the University of Georgia School of Law, presented yesterday in Company Law Forum, a video-seminar offered by Research Group Companies, Markets and Sustainability, a unit within the University of Oslo Faculty of Law.

The Research Group described Bruner’s presentation, “Private Power and Public Good: Harnessing the Corporation for a Sustainable Future”, as follows:

Such hidebound conceptions of the corporation have effectively sacrificed the flexibility and dynamism of the corporate form, thereby obscuring potential governance-related regulatory options that could offer promising solutions to a host of vexing problems. In his new book project, tentatively titled Private Power and Public Good: Harnessing the Corporation for a Sustainable Future, Bruner will re-conceptualize the corporation, not as a fixed and rigid set of legal characteristics but rather as a dynamic legal technology that can be calibrated and re-calibrated in varying contexts, and over time, in response to a dynamic landscape. He will then build upon that framework to explore the corporation’s potential to contribute to environmental, social, and economic sustainability. 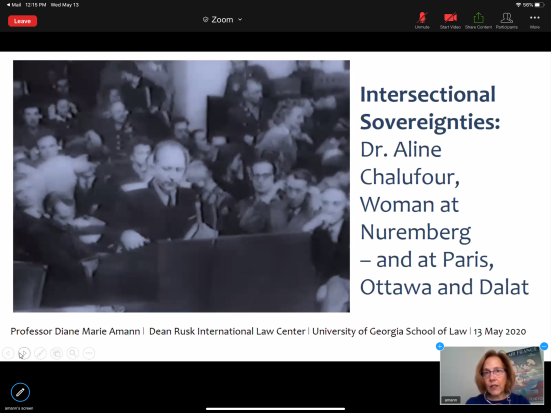 In this post Professor Diane Marie Amann, the Emily & Ernest Woodruff Chair in International Law and Faculty Co-Director of our Dean Rusk International Law Center here at the University of Georgia School of Law, discusses her most recent presentation, at an innovative online seminar.

What an honor to present my work in progress, “Intersectional Sovereignties: Dr. Aline Chalufour, Woman at Nuremberg – and at Paris, Ottawa, and Dalat” last week in “Global History and International Law”, a months-long seminar under way online.

Organizer of this superb scholarly offering is Dr. Anne-Sophie Schoepfel of the Institut d’études politiques de Paris, better known as SciencesPo. Her affiliation struck me as serendipitous, given that the subject of my paper was a graduate of SciencesPo. Born in 1899, Chalufour was also the 6th woman ever to earn a Ph.D. in international law from the University of Paris. In 1945-1946, she was the only woman lawyer on the French team that joined U.S., British, and Soviet allies in prosecuting vanquished Nazi leaders at Nuremberg.

Chalufour is one of the women on whom I’m focusing in my book-length study of women’s roles at that first Nuremberg trial, before the International Military Tribunal. But the richness of her experiences inspired this separate article.

Among the other highlights in Chalufour’s 90-year life: practice before the Paris Bar; activism in national and international feminist groups; teaching at colonial schools in what’s now Vietnam; serving de Gaulle’s Fighting French as a propagandist in Canada; gathering evidence about war crimes from liberated ex-detainees; taking part as the only French prosecutor in Britain’s first trial on Ravensbrück, a Nazi concentration camp for women; and, starting a few years after Nuremberg, service as a national judge.

My paper considers these episodes in light of of 3 theorizations: 1st, the shared sovereignty of the post-World War periods; 2d, sovereignty dynamics in colonial and imperial sites; and 3d, sovereignties of the person, imagined and corporeal. The paper then examines interrelations among these 3.

This was the 5th session in the seminar, which is slated to run through June 24 and has attracted law and history scholars from Asia and Latin America as well as Europe and North America. Next up, at 3 pm EDT this Wednesday, May 20, are 2 papers within the umbrella theme “Imperial Origins of the World Order”; details here.

What’s more, in due course Dr. Schoepfel and her SciencesPo colleagues are posting edited podcasts of each session. Already available at the seminar’s website and its YouTube channel: