Professor Christopher Bruner, the Stembler Family Distinguished Professor in Business Law here at the University of Georgia School of Law, has published “Distributed Ledgers, Artificial Intelligence and the Purpose of the Corporation” in 79 Cambridge Law Journal 431 (2020).

“Distributed ledgers and blockchain technology are widely expected to promote more direct shareholder involvement in corporate governance by reducing costs of voting and trade clearance. Meanwhile, artificial intelligence may shrink the decision-making terrain where corporations rely on human management. This article analyses these technologies and concludes that, while such outcomes are plausible, their potential corporate governance impacts are likely more complex and contingent. Despite the implicit libertarianism that characterises much of the discourse, we in fact have choices to make about how such technologies are developed and deployed – and these policy decisions will have to be grounded in a normative conception of corporate purpose external to the technology itself.”

Bruner presented the work at a conference on “The Future of the Firm” held last year in London.

Christopher Bruner, the Stembler Family Distinguished Professor in Business Law here at the University of Georgia School of Law, presented his scholarship at a conference on “The Future of the Firm” held last Friday in London.

Professor Bruner’s presentation was entitled “Distributed Ledgers, Artificial Intelligence, and the Purpose of the Corporation.”

The event was hosted by the University College London, Faculty of Laws. Co-sponsors included the University of Cambridge Centre for Corporate and Commercial Law, as well as the Brussels-based European Corporate Governance Institute, of which Professor Bruner is an Academic Member.

“Victors’ Justice and the New Turn to Transnational Process” is the title of a paper that Professor Diane Marie Amann presented earlier this month in England, as part of an Oxford University conference, which took place over the course of 2 days at the Law Faculty’s Bonavero Institute of Human Rights, Mansfield College, and at St. Antony’s College.

Through the lens of the “victors’ justice” critique that some late 20th century scholars used to describe post-World War II trials at Nuremberg and Tokyo, the paper examines contemporary interest in transnational means of prosecuting international crimes.

An expert in international criminal law and human rights, Amann is the Emily & Ernest Woodruff Chair in International Law and Faculty Co-Director of the Dean Rusk International Law Center here at the University of Georgia School of Law. For a portion of 2018, she was a Research Visitor/Visiting Fellow at Bonavero/Mansfield College.

Bruner’s contribution is a revised version of his keynote address at a conference on “International Financial Services and Small States,” held in London in 2017.

As part of Cohen’s visit, UCL’s Global Governance Institute invited him to give a public keynote lecture on “Multilateralism’s Life Cycle.” As previously posted, that is the topic of his forthcoming article for the American Journal of International Law.

Cohen is a member of AJIL’s Board of Editors, and serves as Editor of the journal’s International Decisions section. 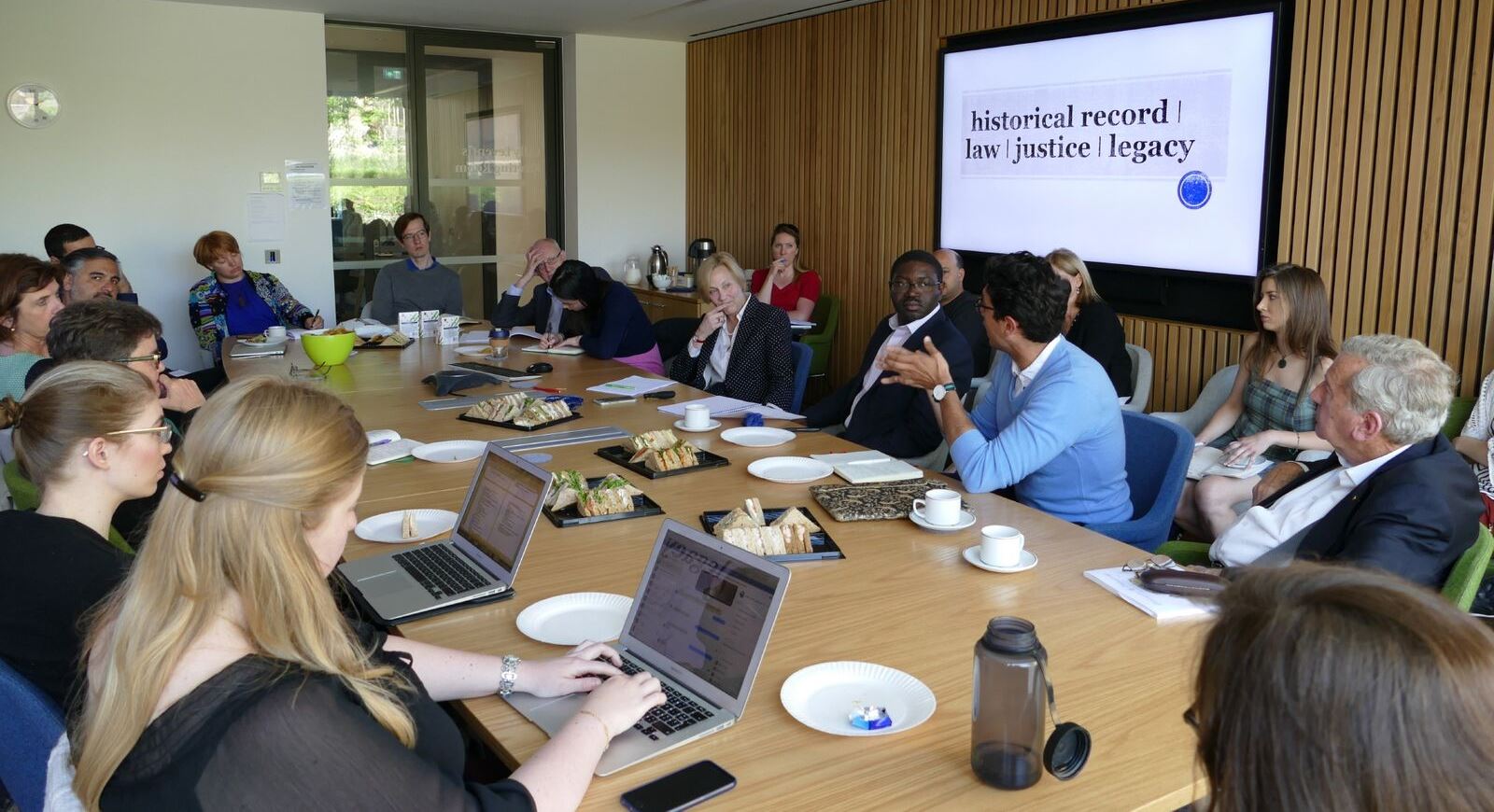 OXFORD – A capstone of my Hilary-Trinity Term visit here took place yesterday, when I presented “A New History of the Nuremberg Trials: Figuring Women and Others into the Narrative” to law students and faculty who gathered at the Bonavero Institute of Human Rights, located at Oxford University’s Mansfield College. The Oxford Transitional Justice Research network cosponsored.

Professor Kate O’Regan, director of the institute and a former judge on the Constitutional Court of South Africa, opened my Research Visitor Seminar. Then came my  presentation of my research on the roles women played at Nuremberg – not only the Trial of the Major War Criminals before the International Military Tribunal, but also the 12 subsequent American trials before what are known as the Nuremberg Military Tribunals. Next, Dapo Akande, Professor of Public International Law at Oxford’s Blavatnik School of Government, offered discussant’s remarks before opening the floor for a stimulating round of Q&A.

I’m grateful to all at the Institute for this event and the hospitality I’ve enjoyed during my stay at a Bonavero Research Visitor and Mansfield College Visiting Fellow. Grateful, too, for the opportunities I’ve had to present this work elsewhere in Europe, at the Irish Centre for Human Rights at the National University of Ireland Galway, University of Stockholm, University of Göttingen, and Max Planck Institute Luxembourg.

OXFORD – University of Georgia School of Law Professor Nathan S. Chapman recently visited Oxford University to deliver a paper entitled “Due Process of War.” He spoke at Oxford’s Trinity College, on the invitation of the Programme for the Foundations of Law and Constitutional Government, a project within the auspices of the Oxford Faculty of Law.

In his presentation, Chapman set forth an historical account of how thinkers in America’s founding era understood the interplay of war and due process. He then linked these understandings to much more recent events, such as the United States’ 2011 targeted killing by drone strike of an American citizen, Anwar al-Awlaki.

The paper follows from Chapman’s other works in this area, including “Due Process Abroad,” published in 2017 in the Northwestern University Law Review. 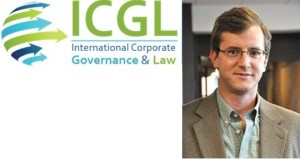 “Contextual Corporate Governance: Tailoring Board Independence Rules by Industry” is the title of the presentation that our Christopher Bruner, J. Alton Hosch Professor of Law at the University of Georgia School of Law, delivered Monday at the annual International Corporate Governance and Law Forum, held this year in England.

Hosted by the Centre for Business Law and Practice at the University of Leeds School of Law and cosponsored by Deakin Law School of Australia and the Alexander von Humboldt Foundation, the 2-day event brought together law and business scholars from around the world to discuss corporate board composition and process.

Bruner, a member of our Dean Rusk International Law Center Council, was among the 20 or so scholars who presented, from Australia, China, England, France, Japan, Norway, and the United States. Here’s the description of his paper:

Over recent decades, several commercially prominent jurisdictions have increasingly required that listed company boards, and certain committees, consist primarily of ‘independent’ (i.e. non-executive) directors. In the United States, for example, the Sarbanes-Oxley Act and the Dodd-Frank Act respectively require that a listed company’s audit and compensation committees be entirely independent. NYSE and NASDAQ rules go further, requiring that a majority of the whole board be independent. Such requirements reflect the prevailing view that independent directors protect minority shareholder interests through greater objectivity and practical capacity to monitor and resist domineering CEOs. That such benefits outweigh the costs – notably, limited information (relative to executive directors) – is assumed.

Recent empirical work, however, increasingly casts doubt on this assumption – at least in certain contexts. While empirical studies initially found little evidence that director independence rules impact corporate performance at all, more recent studies focusing on the cost of acquiring company-specific information suggest that the impacts of such rules are far from uniform. Indeed, mounting evidence suggests that such rules may improve performance where company-specific information can be acquired at low cost, yet harm performance where the cost of information acquisition is high. These findings – commending sensitivity to industry context – dovetail with a parallel body of post-crisis studies associating board independence (and other shareholder-centric governance structures) with potentially undesirable risk-taking incentives in certain industries – notably, finance.

These perspectives offer much-needed nuance to our thinking about corporate governance reform, strongly suggesting that one-size-fits-all rules mandating uniform board structures across the universe of listed companies may widely miss the mark in important contexts. This paper will discuss the history of such reforms, canvass relevant legal and financial literatures, and explore regulatory strategies for more targeted reforms on an industry-by-industry basis.

Christopher Bruner, J. Alton Hosch Professor of Law at the University of Georgia School of Law, took part on Monday at a global conference on “Law, Finance & Sustainability” in Sheffield, England.

Hosted by the Institute of Corporate and Commercial Law at the University of Sheffield, and cosponsored by the Sustainable Market Actors for Responsible Trade (SMART) initiative at the University of Oslo, Norway, the event brought together an international group of scholars and practitioners to discuss financial dimensions of corporate sustainability.

The University of Oxford, England, will host Georgia Law Associate Dean Diane Marie Amann during her research-intensive Spring 2018 semester. In the Hilary and Trinity Terms – March through June – she will be a Research Visitor at Oxford’s Bonavero Institute of Human Rights hosted by the Faculty of Law and a Visiting Fellow at its Mansfield College, where the Institute is based.

Amann joined the University of Georgia School of Law faculty in 2011, taking up the Emily & Ernest Woodruff Chair in International Law. She also has served, since 2015, as the law school’s Associate Dean for International Programs & Strategic Initiatives.

While at Oxford, Amann (right) plans to continue her research on “Women at Nuremberg,” which explores the many roles women played in post-World War II international criminal trials in Europe, as prosecutors, defense counsel, journalists, witnesses, staffers, and defendants.

As a Research Visitor, she also will have the opportunity to take part in Bonavero Institute activities, and will benefit from Oxford’s libraries, seminars and lectures, and other offerings.

The Bonavero Institute was founded in 2016 as a unit of the Oxford Faculty of Law, under the direction of Professor Kate O’Regan, a former judge on the Constitutional Court of South Africa. Construction of the institute building, located at Mansfield College, is expected to be completed in early autumn.

Amann’s research visit in England will follow a January 2018 stint as the inaugural Breslauer, Rutman and Anderson Research Fellow at the Center for Advanced Genocide Research at the University of Southern California Shoah Foundation in Los Angeles.