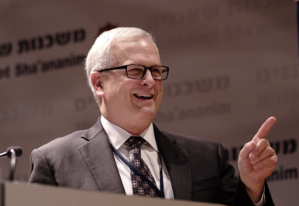 An alumnus and member of our Dean Rusk International Law Center Council has garnered well-deserved praise from a fellow public servant and longtime colleague.

In “A Tribute to Charles A. Allen,” published Friday at Lawfare, Jeh Johnson, a partner in the Paul Weiss law firm and the U.S. Secretary of Homeland Security from 2013 to 2017, celebrated the 20th anniversary of the day that Allen took up the post of Deputy General Counsel (International Affairs) at the U.S. Department of Defense. Johnson wrote:

“To the benefit of us all, he remains in office today, with the vast responsibility of overseeing the legal aspects of the U.S. military’s operations abroad.

“Put simply: Chuck is one of the finest public servants I know. He embodies the best in federal civilian service.”

Johnson, also former general counsel both of the Department of Defense and of the U.S. Air Force, took particular note of Allen’s service, in the wake of the terrorist attacks of September 11, 2001, “at the legal epicenter of the U.S. military’s armed conflicts against al-Qaeda, the Islamic State and the Taliban; the Iraq War; the conflicts in Libya and Syria; the maritime disputes with China and Iran; and many other conflicts, treaties and defense issues too numerous to list.”

Allen, Johnson continued, is “an earnest, low-key public official who consistently works long hours, mentors young national security lawyers and grinds out an extraordinary volume of work” – and the recipient of a Presidential Rank Award.

We at the University of Georgia School of Law are proud to call Allen (JD’82) an alumnus, former Research Editor of the Georgia Law Review, and author of two articles published in our Georgia Journal of International and Comparative Law: “Civilian Starvation and Relief During Armed Conflict: The Modern Humanitarian Law” (1989) and “Countering Proliferation: WMD on the Move” (2011).

As stated in Allen’s DoD biography, he also earned an undergraduate degree from Stanford and an LL.M. from George Washington University. His service in the U.S. Navy Judge Advocate General Corps included a stint as Deputy Legal Adviser, National Security Council, and Attorney-Adviser, Office of Legal Adviser, U.S. Department of State. In his current position, Allen’s responsibilities include

“legal advice on Department of Defense planning and conduct of military operations in the war on terrorism and the war in Iraq, including the law of armed conflict and war crimes, war powers, coalition relations and assistance, and activities of U.S. forces under international law and relevant UN Security Council Resolutions; arms control negotiations and implementation, non-proliferation, and cooperative threat reduction; status of forces agreements; cooperative research and development programs; international litigation; law of outer space; and multilateral agreements.”

(credit for 2015 International Committee of the Red Cross photo, above, of Charles A. “Chuck” Allen at Minerva–ICRC conference on International Humanitarian Law, held in Jerusalem 15-17 November 2015) 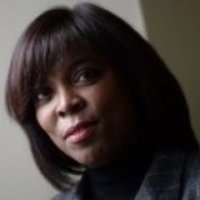 We are deeply honored to announce that one of our distinguished international law alumnae, Ertharin Cousin, has become a member of our Dean Rusk International Law Center Council.

Cousin has just completed a five-year term as Executive Director of the United Nations’ World Food Programme. In that role, she led the world’s largest humanitarian organization. Founded in 1961, WFP has more than 11,000 staffers, who combat hunger and food insecurity on behalf of more than 80 million persons in 82 countries. (credit for photo above)

She earned her J.D. degree from the University of Georgia School of Law in 1982. While here, she took international law classes with our Center’s namesake, Dean Rusk, who was a Georgia Law professor for many years after serving in the Kennedy and Johnson administrations as the United States’ second-longest-serving Secretary of State. Cousin also holds a B.A. degree from the University of Illinois at Chicago, and was one of the first women to graduate from Lane Tech, a prestigious and traditionally male-only public high school in the same city. 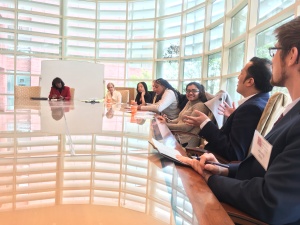 She returned to Georgia Law’s Athens campus last month to receive our alum association’s Distinguished Service Scroll Award. While here, she discussed her work at WFP and her ongoing commitment to end hunger to a group of students now enrolled in international law classes. Cousin stressed that even as direct food aid was provided in the short term, over the long term communities must be given opportunities to provided for themselves, remarking:

“I never met a mother in all the places I’ve visited who wanted to stand in line to feed her children.”

Anticipating her departure from WFP, which took place on April 4, Cousin told students that she planned to continue strategizing to bring an end to hunger as a Visiting Fellow at Stanford’s Freeman Spogli Institute. She said:

Immediately before taking up the post at WFP, Cousin served in Rome, by appointment of President Barack Obama, as the U.S. Ambassador to the United Nations Agencies for Food and Agriculture, and as head of the U.S. Mission to the U.N. Agencies in Rome. Her career also included many private- and public-sector posts. During the centennial Olympic Games, held in 1996 in Atlanta, she served as Senior Advisor to Secretary of State Warren Christopher.

In becoming a member of the Dean Rusk International Law Center Council, Cousin joins other Georgia Law graduates, faculty members, and friends who advise and support the work of the Center.