We’re honored to play a part of the International Committee of the Red Cross launch of its new Commentary on the First Geneva Convention for the Amelioration of the Condition of the Wounded and Sick in the Field, a volume due for release next Tuesday, March 22. 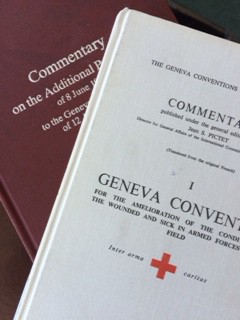 A week later, the head of Georgia Law’s Dean Rusk International Law Center, Diane Marie Amann, will take part in a panel discussion of the new Commentary at 2 p.m. Wednesday, March 30. Later in the year, we anticipate a Georgia Law conference on the same subject: it will be held on Friday, September 23, 2016.

The March 30 panel discussion will take place in the Columbia Ballroom of the Hyatt Regency Washington on Capitol Hill, 400 New Jersey Ave N.W., Washington, D.C. That’s the same hotel hosting the annual meeting of the American Society of International Law from March 30 to April 2. This is a side event, though ASIL and its international humanitarian law interest group, the Lieber Society on the Law of Armed Conflict,  are cosponsors of this event, hosted by the ICRC’s D.C.-based Regional Delegation for the US and Canada.

The Commentary is the 1st in a series of volumes intended to update earlier versions, some of which are pictured above: 4 circa-1952 volumes on the 4 Geneva Conventions of 1949, edited by Jean S. Pictet, plus a circa-1987 volume on Additional Protocols I & II of 1977, produced by multiple editors. In the words of the ICRC:

“Since their adoption, the Conventions and Protocols have been put to the test, and there have been significant developments in how they are applied and interpreted. The new Commentaries seek to incorporate these developments and provide an up-to-date interpretation of the law.”

This initial update carries particular significance because it contains commentary on Articles 1, 2, and 3 Common to all 4 Geneva Conventions. Common Article 2 and Common Article 3 have endured significant re-examination in the counterterrorism climate that’s prevailed since the attacks of September 11, 2001, readers of decisions such as Hamdan v. Rumsfeld and a plethora of academic literature well know (and as I’ve written here and elsewhere).

The discussion at the March 30 launch in D.C. will feature: 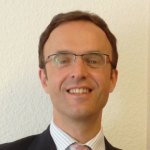 RSVPs for March 30 welcome; for that and any other information on that event, contact Tracey Begley, trbegley@icrc.org.