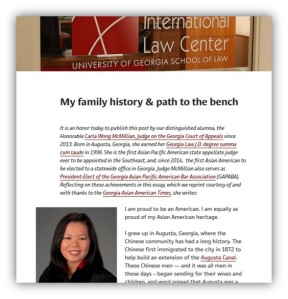 Delighted to announce the appointment to the Supreme Court of Georgia of the Honorable Carla Wong McMillian, who has served as a judge on the Georgia Court of Appeals since 2013. She is a distinguished alumna of the University of Georgia School of Law – and also, we’re proud to note, a past contributor to this blog.

She reflected on these achievements in “My family history & path to the bench,” a 2016 post at this blog, which reprinted an essay she’d written for the Georgia Asian American Times. Available in full here, the essay began:

“I am proud to be an American. I am equally as proud of my Asian American heritage.”