This weekend marks the 70th anniversary of the Judgment of the International Military Tribunal at Nuremberg, a moment recorded in this New York Times front page: 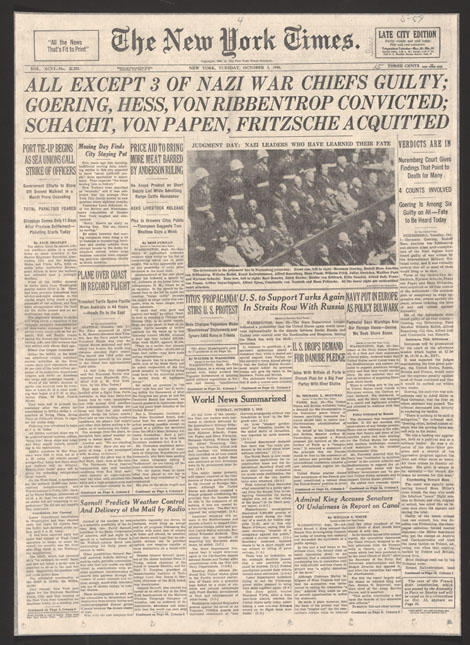 The judgment established that humans, and not only states, may be held responsible for violations of international law – a principle that the General Assembly endorsed in 1950. Recognition that individual acts mattered in the international law soon opened the way for recognition that acts committed against individuals also mattered. The Nuremberg Judgment thus stands as a foundational moment in the international human rights movement, as was recognized inter alia in a 1982 article by Georgia Law Professor Louis B. Sohn, when he was Emily & Ernest Woodruff Chair in International Law, a position I am now honored to hold.

Another Georgia Law professor who’s written about Nuremberg is my colleague Harlan Grant Cohen; these works include: ‘Undead’ Wartime Cases: Stare Decisis and the Lessons of History (2010); Historical American Perspectives on International Law (2009); The American Challenge to International Law: A Tentative Framework for Debate (2003).

My own writings, available here, include studies of the meaning of genocide and essays on women who worked as prosecutors, defense lawyers, and staff (no judges) at postwar trials in Nuremberg and Tokyo. “Women at Nuremberg” is a subject that many IntLawGrrls have addressed, not to mention many more posts on all aspects of international criminal law and international human rights law.