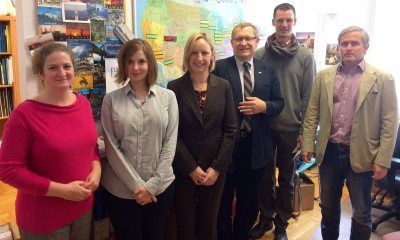 Very pleased to note the appointment of Georgia Law Professor Sonja R. West, an internationally recognized expert in media law,  the inaugural holder of the Otis Brumby Distinguished Professorship in First Amendment Law. News of the position, which is shared by the law school and the University of Georgia Grady College of Journalism and Mass Communication, came in a university press release issued just before the holiday break.

“Sonja is a distinguished scholar in media law, and it is fitting that she be named to this professorship, which is devoted specifically to teaching and research about the First Amendment.”

As noted in a previous Exchange of Notes post, last October West represented Georgia Law in Budapest, Hungary, where she:

► Spoke on “Improving Press Coverage of the Courts through Communication” at the European Judicial Conference on Courts and Communication.

► Met with Budapest-based alums and representatives from the Hungarian-American Fulbright Commission, with whom she discussed Georgia Law’s Master of Laws (LL.M.) degree.  West’s at that meeting the photo above; to her immediate left is Dr. Jessica Lawrence, who earned her J.D. from Georgia Law and now is a Lecturer at Budapest’s Central European University. Surrounding them are Fulbright representatives: at far left, Krisztina Kováts, and to the right of West, Dr. Károly Jókay, Körtvélyesi Zsolt, and Molnár Gábor.

► Visited the law faculty at Pázmány Péter Catholic University. In fact, West has accepted an invitation to return to that Budapest university in June, to take part in a Free Speech/Media Law Discussion Forum.