The first-ever Breslauer, Rutman and Anderson Research Fellowship has been awarded to Diane Marie Amann. Amann joined the University of Georgia School of Law in 2011, taking up the Emily & Ernest Woodruff Chair in International Law. She also has served, since 2015, as Georgia Law’s Associate Dean for International Programs & Strategic Initiatives. 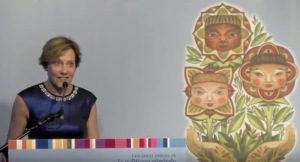 Amann speaking at the 2016 launch of the International Criminal Court Office of the Prosecutor Policy on Children that she helped prepare in her role as the Prosecutor’s Special Adviser on Children in & affected by Armed Conflict.

The Breslauer, Rutman and Anderson Research Fellowship arises out of a recent gift to the Center for Advanced Genocide Research at the University of Southern California Shoah Foundation in Los Angeles.

Established by Steven Spielberg in the early 1990s, just after he completed his film Schindler’s List, the foundation contains extensive visual history archives. These include oral histories by numerous participants in the post-World War II trials in Europe. Those trials lie at the core of Amann’s scholarship on “Women at Nuremberg,” which explores the many roles women played in those proceedings, including prosecutors, defense counsel, journalists, witnesses, staffers, and defendants – everything except judges.

Among those whose oral histories may be found at these archives are two members of the U.S. prosecution team: Cecelia Goetz, who as part of the Krupp case became the only woman to deliver part of an opening statement at Nuremberg, and Belle Mayer Zeck, who helped to try the Farben case. As quoted at the USC Shoah Foundation website, Amann commented:

“I’m very interested in finding out what they remember and what they thought was important and what their feelings were about the Nuremberg project. It seems to me there’s a lost story about that era that would be worth uncovering to give a richer picture of what that period was about.”

Amann’s visit to USC will occur next January, during a research-intensive Spring 2018 semester during which she will continue to pursue a Ph.D. in Law at Leiden University in the Netherlands.