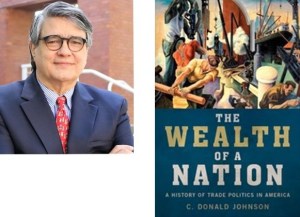 C. Donald Johnson, Director Emeritus of our Dean Rusk International Law Center, University of Georgia School of Law, will receive a top honor this week in recognition of his 2018 Oxford University Press book,  The Wealth of a Nation: A History of Trade Politics in America.

The 2019 Certificate of Merit for High Technical Craftsmanship and Utility to Lawyers and Scholars (Honorable Mention) will be presented to Johnson during the 113th American Society of International Law Annual Meeting, occurring this week at the Washington Hilton in Washington, D.C. The presentation will take place during the Assembly of the Society – of which Georgia Law is an Academic Partner – at 4:45 p.m. Thursday, March 28.

In the words of the Society:

“This honor is awarded annually, based on the recommendation of a committee of Society members, to a recent work that represents a distinguished contribution to the field.”

In his book Johnson, our Center’s Director from 2004 to 2015, traces the history of trade politics in order o explore whether the United States is better served by a free trade agenda or protectionist measures. His expertise on these issues includes prior service as Ambassador in the Office of the United States Trade Representative and as a U.S. Representative, as well as his international trade law practice as a partner at the Washington law firm Patton Boggs. Johnson earned his Georgia Law J.D. in 1973, serving as Articles Editor of the Georgia Journal of International & Comparative Law, and then earned an LL.M. degree in International Economic Law and International Relations from the London School of Economics and Political Science.

Johnson serves on our Center’s Council, and recently visited us for a launch of his book and to present at a GJICL conference. We look forward to joining others Thursday at ASIL in celebrating his well-deserved honor.