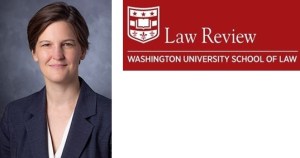 Professor Melissa J. Durkee, the J. Alton Hosch Associate Professor of Law here at the University of Georgia School of Law, has published her article “Interstitial Space Law” in the latest issue of the Washington University Law Review.

“Conventionally, customary international law is developed through the actions and beliefs of nations. International treaties are interpreted, in part, by assessing how the parties to the treaty behave. This Article observes that these forms of uncodified international law—custom and subsequent treaty practice—are also developed through a nation’s reactions, or failures to react, to acts and beliefs that can be attributed to it. I call this ‘attributed lawmaking.’

“Consider the new commercial space race. Innovators like SpaceX and Blue Origin seek a permissive legal environment. A Cold-War-era treaty does not seem adequately to address contemporary plans for space. The treaty does, however, attribute private sector activity to nations. The theory of attributed lawmaking suggests that the attribution renders the activity of private actors in space relevant to the development of binding international legal rules. As a doctrinal matter, private activity that is attributed to the state becomes “state practice” for the purpose of treaty interpretation or customary international law formation. Moreover, as a matter of realpolitik, private actors standing in the shoes of the state can force states into a reactive posture, easing the commercially preferred rules into law through the power of inertia and changes to the status quo. Attributed lawmaking is not a new phenomenon but it may have increasing significance at a time when multilateral lawmaking is at an ebb, lines between public and private entities are blurring, and the question of attribution becomes both more complex and more urgent.”

The article’s also available at SSRN.