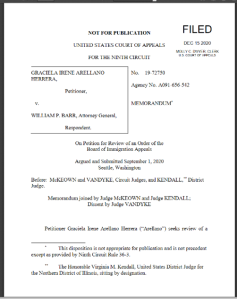 A woman seeking withholding of removal from the United States has won her challenge to an adverse ruling by the Board of Immigration Appeals – a challenge briefed and argued by students in the Appellate Litigation Clinic here at the University of Georgia School of Law.

By a 2-1 decision issued Tuesday in Case No. 19-72750, Arellano Herrera v. Barr a panel of the U.S. Court of Appeals for the Ninth Circuit reversed and remanded to the BIA.

The panel majority in Case No. 19-72750, Arellano Herrera v. Barr, comprised Ninth Circuit Judge Margaret M. McKeown and U.S. District Judge Virginia Mary Kendall, sitting by designation. Its opinion effectively reinstated the first decision in the case, in which an Immigration Judge had ruled for the Clinic’s client, Graciela Arellano Herrera, whose parents brought her to the United States three days after her birth.

In oral arguments conducted online this past September (prior post), Georgia Law 3L Jason N. Sigalos argued that if Arellano Herrera were sent back to her native Mexico it was more likely than not that member of a drug cartel would torture her, with the acquiescence of one or more public officials. To permit such a risk, the Clinic team contended, would violate non-refoulement (non-return) obligations that the United States took on when it ratified the 1984 Convention Against Torture. The panel majority agreed.

The panel’s third member, Ninth Circuit Judge Lawrence James Christopher VanDyke, agreed that the BIA had erred on one challenged ground, but in his view the BIA was correct in finding that Arellano Herrera could safely relocate in Mexico. He thus dissented, reasoning that the latter finding alone supported affirmation of the BIA ruling.

The Clinic team included Sigalos and his classmates, 3L Mollie M. Fiero and John Lex Kenerly IV, who earned his J.D. earlier this year. They worked under the supervision of Thomas V. Burch, the Clinic’s Director, and Anna White Howard, the Clinic’s Counselor in Residence. (prior posts)