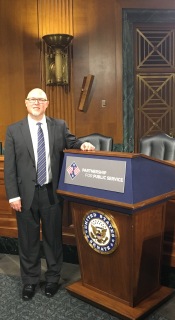 A distinguished University of Georgia School of Law alumnus, Jon R. Smibert (JD 1996), has been honored as one of the United States’ top federal employees. The honor was celebrated this month at a breakfast at the Dirksen Senate Office Building in Washington, D.C.

Smibert serves as Resident Legal Advisor for the U.S. Department of Justice at the U.S. Embassy in Tirana, Albania. As reported in the Washington Post, he is one of 26 finalists for a 2017 Samuel J. Heyman Service to America Medal, also known as a “Sammie,” awarded by the Partnership for Public Service. Smibert is a finalist in National Security and International Affairs; the medalwinners will be chosen later in the year.

In addition to this U.S. recognition, Smibert recently received a medal from  from the President of Albania. In that country, he has worked to assist in overhauling the legal system, with the particular aim of reducing public corruption. Smibert helped to redraft about a third of Albania’s constitution and more than a dozen statutes. Innovations included vetting requirement for judges and prosecutors, as well as establishment of a Constitution-level body dedicated to investigating and prosecuting corruption.

“A lot of Albanians consider him a hero. The Albanian prime minister has called this ‘the most important reform since the fall of communism. Jon Smibert has a real passion for what he does, not only for representing the U.S., but in making Albania better.”

Before his posting in Albania, Smibert served in Pristina, Kosovo. In addition to helping to establish independent prosecution offices and to draft Kosovo’s Criminal Procedure Code, Smibert helped to launch the Kosovo Specialist Chambers, a war crimes court that sits at The Hague in the Netherlands.

Smibert began his career as a federal prosecutor in Atlanta, Georgia, and later in Cleveland, Ohio. His publications include a 240-page book, Principles of Evidence (2014).