Our University of Georgia School of Law Dean Rusk International Law Center is pleased to welcome a delegation of 45 judges and court personnel from Brazil for a two-week judicial training course here in Athens. Organized in partnership with the University of Georgia Institute of Continuing Judicial Education and the Supreme Court of Justice of the Brazilian state of Pernambuco, the training is designed to introduce participants to the U.S. judicial system.

For more than two decades, the Dean Rusk International Law Center has conducted International Judicial Trainings, particularly for the Brazilian judiciary. Over the years, the trainings have provided a comparative perspective on legal initiatives such as drug and other specialty courts, domestic violence programs, and continuing judicial education.

Justice Fernando Cerqueira Norberto dos Santos, who has been involved in the International Judicial Training partnership with the Center since its inception, leads the current delegation.

The course, which began on Sunday, focuses on judicial administration. It features speakers from Georgia Law as well as area practitioners and court personnel. The training includes a trip to the Gwinnett County Justice and Administration Center, and participants also will learn about the appellate courts and programs of the State Bar of Georgia in Atlanta.

Law students, lawyers, and legal academics in Brazil and Argentina will soon have the opportunity to speak with graduates of the University of Georgia School of Law Master of Laws degree.

Two of our alums will attend university fairs in Curitiba and Buenos Aires sponsored by Education USA, an arm of the U.S. Department of State. They will be on hand personally to discuss the career benefits and special advantages of earning the Master of Law, or LL.M., degree at Georgia Law. (See prior posts about our current LLM students, as well as our hundreds of LLM alums, here.)

EducationUSA is the US Department of State’s global network of educational advising centers that promotes the more than 4,700 accredited U.S. colleges and universities. Find the nearest advising center.

Interested persons are invited to register and attend. And feel free to e-mail LLM[at]uga.edu in order to assure one-to-one meeting – or to correspond, in the event you’re unable to attend one of the fairs.

Hope to see you there!

Beginning this year, Georgia Law’s annual International Judicial Training will be offered in partnership with CIFAL Atlanta, an affiliate of the United Nations Institute for Training and Research, or UNITAR.

Dean Rusk International Law Center and the Institute of Continuing Judicial Education of Georgia. For nearly 20 years, the trainings have provided provided a high-level learning experience to foreign judges. Included are seminars with distinguished Georgia Law faculty and visits to a variety of courts around the state.

As one of several training centers across the globe linked to UNITAR, CIFAL Atlanta works to build capacity among local governments and civil society leaders, with particular emphases on economic and infrastructure development, fair trade, and good governance.

The 2016 International Judicial Training, to be held November 27 to December 10, will advance Goal 16 of the United Nations 2030 Agenda for Sustainable Development, which is

“dedicated to the promotion of peaceful and inclusive societies for sustainable development, the provision of access to justice for all, and building effective, accountable institutions at all levels.”

Leaders of the new collaboration, which extends the trainings’ global outreach, include two Georgia Law graduates: Chris Young, CIFAL Executive Director, and Laura Tate Kagel, Director of International Professional Education at the Dean Rusk International Law Center. They work alongside Richard Reaves, Executive Director of the Institute of Continuing Judicial Education of Georgia, who brings decades of experience in organizing continuing education seminars for judges. Reaves’ extensive contacts throughout Georgia create opportunities for informative exchanges between the international judges and their U.S. counterparts. In Kagel’s words: 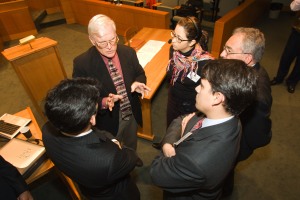 “The International Judicial Training is more than simply an educational program. It can lead to significant reforms in terms of effective administration of justice and stimulate cross-cultural relationships that can bear fruit for years to come.”

Providing an example of this is Fernando Cerqueira Norberto, Secretary-General of ENFAM, the governing body of Brazilian judicial colleges. According to Cerqueira, Brazilian judges’ longstanding participation in the International Judicial Training correlates to the adoption in his country of innovations such as small claims courts, mediation procedures, and drug courts.

Judges and court personnel from all countries are welcome to apply for the 2016 International Judicial Training; further details and registration are available here.