“No Exit at Nuremberg: The Postwar Order as Stage for 21st-Century Global Insecurity” is the title of the keynote address that University of Georgia School of Law Professor Diane Marie Amann delivered Thursday at the University of Glasgow, Scotland, thus opening the 2022 Research Forum of the European Society of International Law. Her topic dovetailed with the forum’s overall theme, “International Law an Global Security: Regulating an Illusion?”

Amann framed her talk around two artefacts of the period immediately after World War II, when the 1945-46 Trial of Major War Criminals was unfolding before the International Military Tribunal at Nuremberg, Germany: the play that Jean-Paul Sartre entitled Huis Clos but that is known in English as Vicious Circle or No Exit; and the front page of a French newspaper that referred not only to that play, but also to food shortages, the East-West threat spurred by the advent of nuclear weapons, and the IMT trial. She then linked the military, economic, political, and human security threads these artefacts raised to current events including conflicts in Ukraine and elsewhere. 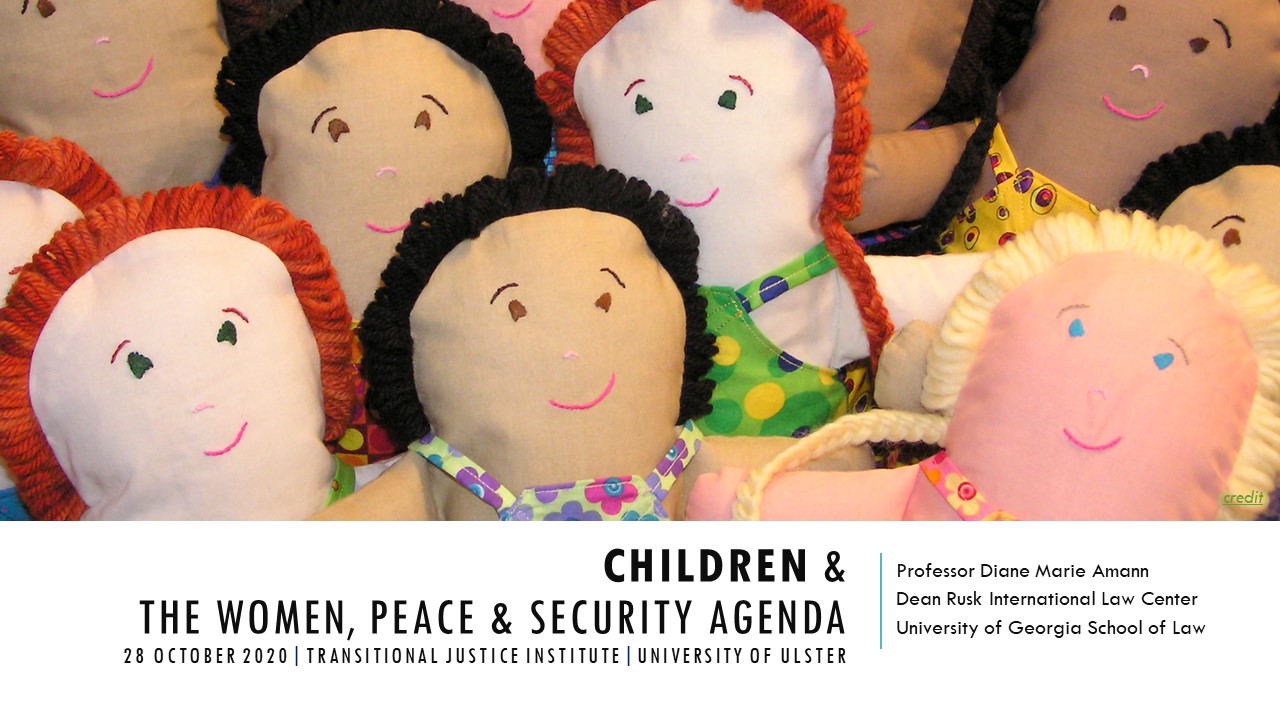 “Children and the Women, Peace and Security Agenda” is the subject of a talk delivered today by Professor Diane Marie Amann, holder of the Emily & Ernest Chair in International Law and Faculty Co-Director of our Dean Rusk International Law Center here at the University of Georgia School of Law. The talk was her online contribution to a year-long “WPS@20” seminar series hosted by the Transitional Justice Institute at the University of Ulster.

As its title indicates, the series, which began in February, has featured numerous speakers’ reflections on the WPS Agenda, which began with the passage on October 31, 2000, of UN Security Council Resolution 1325 on Women and Peace and Security. Since that date this agenda has inspired a range of activities, in the United Nations (as depicted in this UN Women 20-year  timeline) and other international organizations, and also in nongovernmental organizations and academia.

Amann’s contribution to the series benefited greatly from the team of Georgia Law student researchers with whom she worked this summer: Zoe Ferguson (JD’20), 3L Charles Wells, and 2Ls Courtney Hogan and Michael Ramirez.

This seminar focused not on women, but on an adjunct constituency cited in Resolution 1325; that is, on children. Here’s the abstract:

UN Security Council Resolution 1325 on Women, Peace and Security contains more than a dozen mentions of young people; to be precise, it refers twice to “women and children” and more than a dozen times to “women and girls.” Since the resolution’s adoption 20 years ago this week, many initiatives have arisen to combat conflict-related harms to children. These include the Children and Armed Conflict Agenda launched by Security Council Resolution 1612 (2005) and other inter- and non-governmental efforts. This seminar will evaluate the WPS resolution, 20 years on, as a child-rights instrument. Consideration of the interim initiatives will help frame that assessment, as will evolving understandings of children’s sexual and gender identities, of children’s agency and children’s autonomy – all factors that may counsel against too-quick conjoinments of “children,” or “girls,” with “women.”

The seminar is available as a PowerPoint presentation and as an audio podcast at TJI’s Apple and Spotify accounts.

Pleased today to welcome a contribution from Elizabeth Weeks, Associate Dean for Faculty Development and J. Alton Hosch Professor of Law here at the University of Georgia School of Law. Weeks concentrates her teaching and scholarship in fields of law related to health care. In the post below, she introduces her new co-authored book, which will be of great interest to all concerned about the human right to health. It will be the subject on Wednesday, February 27, of a Georgia Law book panel featuring Law Professors Jennifer Bennett Shinall of Vanderbilt, Stacey Tovino of Nevada-Las Vegas, Ani Satz of Emory, and Nicolas P. Terry of Indiana-Indianapolis.

I am delighted to announce the recent publication by Cambridge University Press of my book, Healthism: Health Status Discrimination & the Law, co-authored with Jessica L. Roberts, Alumnae College Professor in Law  and Director of the Health Law & Policy Institute at the University of Houston Law Center.

Healthism proposes a new protected category – the unhealthy – and examines instances of discrimination against the unhealthy in multiple contexts:

Our book considers these and a host of other examples. It concludes that some operate as normatively wrong – or “healthist” – laws, policies, or practices. Others, however, are not only permissible, but also may be desirable, inasmuch as they encourage or support healthier lifestyles.

This book’s most important contributions are:

The genesis of our healthism project was the Patient Protection and Affordable Care Act of 2010, or ACA, which largely prohibits health status discrimination in health insurance in the United States.  Specifically, the ACA prohibits insurers from denying coverage based on preexisting conditions or charging higher premiums based on individual risk factors.

In 2010, single-payer health system, or a national health system, or even “Medicare for All,” were (and likely remain) political nonstarters in the United States. President Barack Obama’s signature law, the ACA, instead effected a sort of mandatory mutual aid society, a compelled communitarian approach, to health care.  In order to ensure that coverage for the unhealthy remained affordable, the law required most Americans to obtain health insurance – whether through eligibility for a government program or employer-sponsored plan, or by purchasing on the individual and small-group market – with government subsidies for some.

As of January 1, 2019, however, a critical pillar of that legislative design has been removed:

According to the Tax Cuts and Jobs Act, or TCJA, a law enacted in November 2017 under President Donald J.  Trump, the tax penalty associated with the so-called individual mandate no longer applies.  Americans now again are free to “go bare,” without any health insurance, or to purchase short-term, catastrophic-only, or other high-deductible/low-premium, limited coverage.  Many plans on the market still operate with the antidiscrimination provisions and other protections required by the ACA; however, no one any longer is compelled to purchase them.

The effect may well be to make those plans less affordable for the unhealthy – those who most need comprehensive coverage.  TCJA is just one of several U.S. reforms that threaten to erode legal protections for the unhealthy and so to reintroduce legal and social acceptance of healthism.

Our book stops short of proposing a model law or draft constitutional provision to comprehensively address this problem. Instead, it offers readers a workable rubric to navigating the shifting landscape of permissible and impermissible health-status discrimination.

LEUVEN – Final sessions of our 2018 Global Governance Summer School‘s Belgium leg came to an end yesterday, even as the country’s national team vaulted into the final four of the World Cup.

Day 5 of the summer school, devoted to Global Security Governance,  began with a lecture by Dr. Nicolas Hachez. He is a Fellow at the Leuven Centre for Global Governance Studies, University of Leuven, with which we at the Dean Rusk International Law Center, University of Georgia School of Law, partner to present the Global Governance Summer School. Hachez’ lecture began with an historical account dating to Aristotle, and ended with a survey of contemporary challenges to rule of law and democracy. (Just below, he listens to a response from Georgia Law student Brooke Carrington.) The presentation provided a valuable recap of many issues raised at the high-level RECONNECT conference our students attended earlier in the week.

Next, yours truly, Georgia Law Professor Diane Marie Amann, Emily & Ernest Woodruff Chair in International Law, one of our Center’s Faculty Co-Directors, and a founding Co-Director of the Global Governance Summer School. I introduced the concept of Global Security Governance, which incorporates within its analysis of human, national, and collective security insights from traditional international law subfields like human rights, the laws of war, and development law.

Our Center’s Director, Kathleen A. Doty, offered an overview of legal regimes related to disarmament and weapons control, including the Nuclear Non-Proliferation Treaty and the Chemical Weapons Convention. Then, as pictured at top, she led our summer school students – variously educated at Georgia Law, Leuven, and several other European institutions – in a spirited, simulated, multilateral negotiation for a new treaty to curb an imagined new development in weapons technology.

The week’s classroom component concluded with a lecture on “Global Governance, International Law and Informal Lawmaking in Times of Antiglobalism and Populism” by Leuven Professor Jan Wouters (right), Jean Monnet Chair ad personam EU and Global Governance, Full Professor of International Law and International Organizations, Director of the Leuven Centre for Global Governance Studies, and founding Co-Director of our summer school. Touching on concepts and issues introduced throughout the week, Wouters exposed shortcomings of classic international law. He further urged greater acceptance of the significance of informal lawmaking actors, norms, and processes, which form the core of global governance studies.

Leuven and Georgia Law students, faculty, staff, and friends then enjoyed a conference dinner, plus a live, and lively, screening of the Belgium Red Devils’ 2-1 World Cup victory over Brazil – then headed to Oude Markt to celebrate with other denizens of this lovely city.