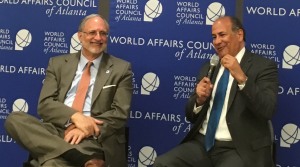 Ambassador Noriega emphasized the importance of the crisis in Venezuela to U.S. interests not only because of its proximity to the United States, but also because, he said, it is serving as a breeding ground for drug smuggling, money laundering, and support of global terrorist networks. He warned that should Venezuela become a failed state, the vacuum of power could worsen this situation. He opined that Venezuelan President Nicolás Maduro‘s control over the country’s situation was tenuous, and said that the likelihood of violence during a regime change and a refugee crisis was high.

On a positive note, Noriega said he was encouraged by the opposition party’s success in December’s parliamentary elections. Both he and Ambassador Shapiro stressed, to the large number of Venezuelans in the audience, that political organization would be key to creating change in U.S. policy towards Venezuela. 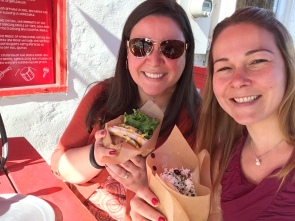 In all, a highly interesting discussion, punctuated by a fun excuse for Martica, left, and me to grab some arepas at Atlanta’s own Arepa Mia. It’s one of only a few, but growing number, of Venezuelan restaurants in the United States.