Over the last decade it was my honor on occasion to invite Judge Pat Wald to join in a project, to contribute a writing or to speak at an event. Invariably she accepted with the same wry caveat: “Yes, if I am still here by then.” Happily she always was still “here,” enlivening every project to which she contributed. But now she is not. News media reported that Patricia Anne McGowan Wald died in her Washington home yesterday, having succumbed at age 90 to pancreatic cancer.

Many obituaries will focus on her prodigious and inspiring career in the United States: her journey, from a working-class upbringing in a single-parent family, to practice as a lawyer on child rights and in the Department of Justice, to service, in the District of Columbia Circuit, as the 1st woman Chief Judge of a U.S. Court of Appeals, and quite recently, as an Obama appointee to the Privacy & Civil Liberties Oversight Board.

We international lawyers also will recall Wald’s fierce service as a judge on the International Criminal Tribunal for the former Yugoslavia. There, she took part in noted judgments, among them a genocide conviction in Prosecutor v. Krstić and a “turning point” appellate ruling in Prosecutor v. Kupreškić.

Even after retiring from the ICTY, Judge Wald championed international criminal justice, placing particular emphasis on women. It was my privilege to welcome her interventions on these subjects, and at times to aid publication of her contributions (Pat’s computer savvy was, it must be said, rudimentary). 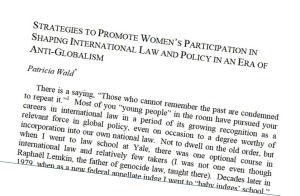 Just last year, our Georgia Journal of International & Comparative Law was honored to publish Pat’s essay “Strategies to Promote Women’s Participation in Shaping International Law and Policy in an Era of Anti-Globalism,” based on remarks she’d given here at the University of Georgia School of Law Dean Rusk International Law Center. They were a highlight of our 10th birthday conference for IntLawGrrls blog, not least because Pat referred to us assembled scholars and practitioners as “you ‘young people’ in the room.” She traced the beginnings of international criminal justice, then said:

“I do not suggest that the process of integrating women as upfront participants in international courts, let alone the inclusion of the crimes most commonly committed against women as worthy subjects of international criminal law jurisprudence, has been completed. More accurately, these developments had just gotten off to a reasonable start at the moment that global politics seem to have begun to shift toward a so-called anti-globalist populism. My central point, therefore, is that we must strategize in the face of a desired, yet elusive future.”

Her strategies: ally to strengthen international law, international legal education, and global-mindedness in many sectors, including the arts; “protec[t] the venues in which women have had significant impact,” including the International Criminal Court and related forums; and work globally to raise women’s awareness “about educational opportunities, rights to land ownership and profits, how to start a small business, how to farm efficiently, how to participate in voting or run for office, and about legal rights to divorce or separation.” 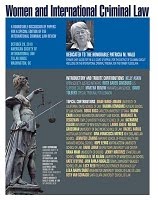 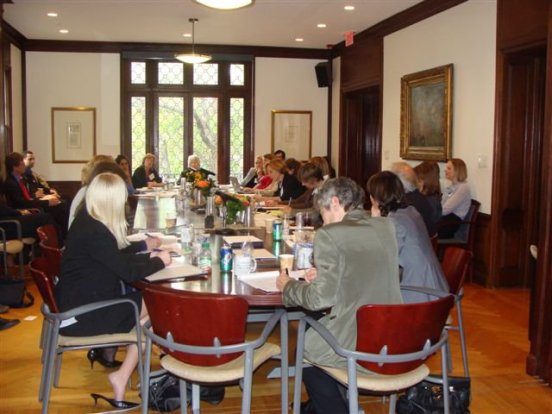 In keeping with the blog’s practice at that time, Pat dedicated her IntLawGrrls posts to a transnational foremother, “a wonderful German/Jewish woman, Gisela Konopka,” a University of Minnesota social work professor with whom Pat had collaborated in a lawsuit against the Texas Youth Authority. In her lifespan of 93 years, Konopka, Wald wrote, “fought in prewar Germany for children’s rights, was put in a concentration camp, managed to get out and work her way through occupied Europe to America, where she became the champion of children, especially girls, who got in trouble with the law.” Explaining how Konopka had influenced her, Judge Wald penned a sentence that today does service as her own epitaph:

“She inspired me as to what an older woman can do right up to the point of departure to help those behind.”