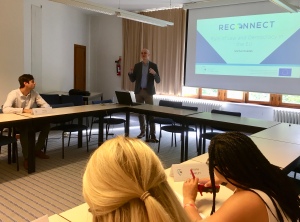 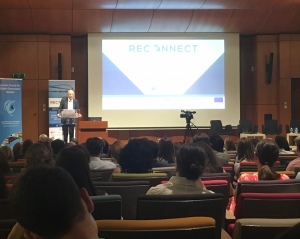 ► Harlan Cohen, Gabriel M. Wilner/UGA Foundation Professor in International Law and Faculty Co-Director of the Dean Rusk International Law Center here at the University of Georgia School of Law and a member of the AJIL Board of Editors. He published a an Editorial Comment featured on the issue’s cover and entitled “What is International Trade Law For?” (pp. 326-46), as well as a review of Not Enough: Human Rights in an Unequal World, a 2018 Harvard University Press book by Samuel Moyn (pp. 415-19).

► Melissa J. Durkee, a J. Alton Hosch Associate Professor of Law. She too published a book review, of Lawmakers: International Organizations in the Crafting of World Markets, a 2017 Cambridge University Press volume by Susan Block-Lieb and Terence C. Halliday (pp. 422-28).

It’s our pleasure today to publish this post by Chanel Chauvet, a member of the Georgia Law Class of 2018 who serves as a Student Ambassador at our Dean Rusk International Law Center. This past summer, Chanel (below left) completed a summer course on international humanitarian law at Leiden Law School’s Grotius Centre for International Legal Studies at The Hague, Netherlands. While there, she accompanied Georgia Law Associate Dean Diane Marie Amann, who serves as the Special Adviser to International Criminal Court Prosecutor Fatou Bensouda on Children in & affected by Armed Conflict, at an NGO consultation on the draft Policy on Children, set for final release this autumn. In today’s post, one in a series on our recent conference on international humanitarian law, Chanel writes:

I feel honored to be able to attend the University of Georgia School of Law, not only for the premier education, but also for the incredible opportunities that are extended to students.

Following introductions, the keynote speaker and UGA Law alumnus, Dr. Jean-Marie Henckaerts (right) delivered his lecture. To begin the conference, the Dean of University of Georgia School of Law, Peter “Bo” Rutledge, had given an introductory speech, in which he emphasized that UGA Law is a “home” to students and alumni. Personally, I thought it was great to have a distinguished alumnus working within the field of IHL return to our “home” to enrich the UGA Law community.

Dr. Henckaerts discussed three themes: his background; the foundations of international humanitarian law; and the process and methodology of updating the Commentaries to the four Geneva Conventions. This updating is needed, he said, because of advancements in technology and other forms of warfare that have developed since the Commentaries were last updated more than a half-century ago. The effort is significant because of its influence in enhancing the understanding of contemporary international law.

Regarding his background, Dr. Henckaerts serves as the main editor to the Commentaries, and the Legal Adviser at the ICRC. A private organization that was established in 1863, the ICRC consists of 1,500 staff members in 80 different countries. They work to promote and implement IHL, in addition to other initiatives, such as assisting and protecting persons in and affected by armed conflicts. One of the ICRC’s most recent efforts to support this goal involved delivering water in Syria, a country currently plagued with an ongoing non-international armed conflict. Dr. Henckaerts noted that aside from the fact that water is a basic human need, it is also important to prevent the spread of disease.

International humanitarian law essentially governs all aspects of war by regulating hostilities and protecting certain groups of people, including civilians and prisoners of war. It finds its basis in the four Geneva Conventions adopted in 1949, which are among some of the very few treaties that have been universally ratified or acceded to. I have listed below the primary purposes of each of the Geneva Conventions and the first two Additional Protocols:

According to Dr. Henckaerts, the value of 2016 ICRC Commentary on the First Geneva Convention is that it will serve as a tool and reference source on various topics of international humanitarian law. 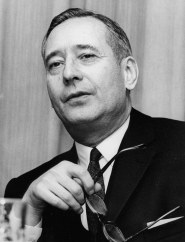 With respect to the process and methodology of revising the Commentaries to the first Geneva Convention, he emphasized that the revision process was collaborative in nature. It was an effort between ICRC representatives and other IHL experts throughout the world to update the “Pictet Commentaries,” the Commentaries created shortly after the 1949 Geneva Conventions were adopted. Interestingly enough, the updated 2016 Commentary reflects diverging views extracted from various consultations between the experts.

Dr. Henckaerts also acknowledged that the Commentary cannot be regarded as the ultimate authority on the Geneva Conventions for a number of reasons:

With regard to the process going forward, Dr. Henckaerts reported that the ICRC working group has both begun the revision process on the second Geneva Convention and implemented a timeline to complete the Commentaries to the remaining two Geneva Conventions.

Following this keynote address was a panel of IHL experts including Oxford Law Professor Dapo Akande, Emory Law Professor Laurie Blank, Major-General Blaise Cathcart, the Judge Advocate General of the Canadian Armed Forces, and New York University Law Professor Ryan Goodman. They offered their critiques on the 2016 Commentary. One question they asked was left unanswered: How did the ICRC determine that the Commentaries needed to be updated?

Other questions, posed by Professor Goodman, related to how the Commentaries would address the concept of transnational NIACS, and what would be the implications of this classification within the cyber realm. To illustrate this ideam he asked how the Commentaries would address people, spread across different states, who organized a coalition in the online realm and used cyber weapons.

There also seemed to be an overarching theme of the discussion. It centered on whether the Geneva Conventions should be interpreted through an originalist or an evolutionist perspective. The 2016 ICRC Commentary has provided enough deference to the original Commentaries, but it has evolved in a sense, in order to properly address the technological advances and military developments since the inception of the original Commentaries.

In any event, it is safe to say that all of the experts are curious to see how the current and future conflicts will test the 2016 ICRC Commentary.

For more information regarding the role of the Commentaries, please click here.